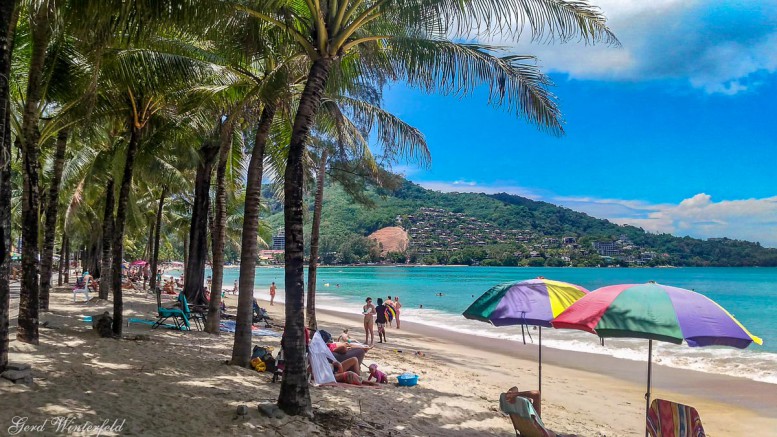 Phuket Island is located on the west coast of Thailand, in the Andaman Sea and it is Thailand’s largest island. The well known tourist beaches, such as the Patong Beach, Karon or Kata Beach, have developed since the mid-80s, from mostly small fishing villages, to veritable tourist cities.

Phuket is also the place in Thailan where I had my very first holiday in Thailand. That was a long time ago in December 1987. By that time the Beach Road in Patong was still a dirt road, just about to be asphalted. The road over to Karon Beach did not even exist but was under construction.

For the western tourists or anyone who wants to stay longer on Phuket, the island offers everything your heart desires. There are big shopping centers such as Tesco Lotus or BIG C, where you can buy western items and also western food.

Some foreigners who have settled there bake delicious bread and rolls or produce even German sausage and other western meat products.

Much more important than all the things you can buy in the shops there is the fact that there are plenty of accommodations for foreigners available for rent. Small houses or apartments, which you can usually rent from around 200 Euros a month, are everywhere on the island but always a bit back from the beach area.

In addition, there is also a huge real estate market, where you can invest in real estate projects, such as condominiums. However, caution is advised, since it is well known that foreigners can not buy and own land in Thailand.

Due to its own airport and a bridge connecting the island to the mainland, the transport and supply options on Phuket are almost unlimited. You can fly in just 1 hour with one of the budget airlines to Bangkok or even for a visa run or shopping trip to Singapore.

For all those who are planning to set up a business in Thailand, no matter what kind, there are plenty of international Low Offices or consulting companies who will help to set up the company.

Also the health care on Phuket is great. There are several private hospitals, such as the Bangkok Phuket Hospital, which has a very good reputation and international standards. However, the privately run hospitals are very expensive, so that an internationally valid health insurance is mandatory.

However, caution should be taken while living on Phuket because in addition to all the amenities, there are also many dark figures. Thais and foreigners alike who are there to cheat others.

In particular, one should be careful when doing business with your own compatriots, not to be ripped off.

Living on Phuket means living where others spend their holidays …