The house in this article was build between February and April in 2014 by a friend of mine and I was able to capture the entire building process. 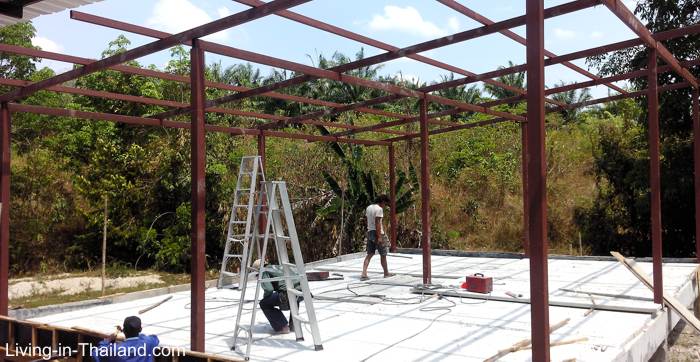 …but the framework is from iron…

The house was built on the basis of normal foundations, as they are known from other houses. It stands on columns, about 80 cm above the ground. The actual house consists of an iron construction, with special wall panels for the exterior walls which are simply screwed to the iron sceleton.

Details of the Wall Panels simply screwed to the iron colums

The wall panels are about 5mm thick and made of a special cement composite, which is also used for the roof panels.The interior walls are made of plasterboard, only the bathroom walls are built of hollow blocks.

The walls and Windows…

This is how the front is being made 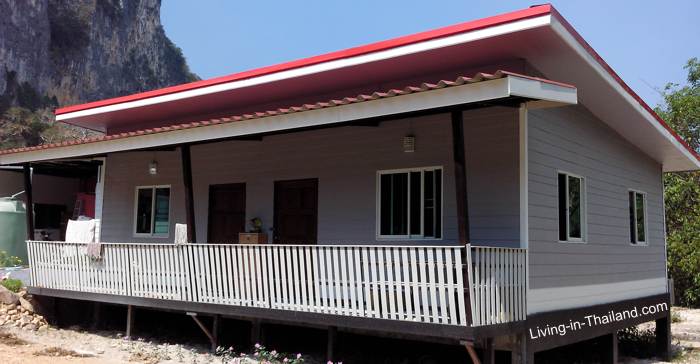 Cost of building a cheap house in Thailand

This is a house with two seperate apartements of 40 m² each, so two sleeping rooms and two bath rooms. The cost of building this house was originally calculated to 470,000 Baht but due to some special requests by the owner, it ended up with about 500,000 Baht. This price includes all building materials, such as the concrete, roof, windows, the 2 bath rooms and the labour cost.

4 Comments on "How to Build a Cheap House in Thailand"