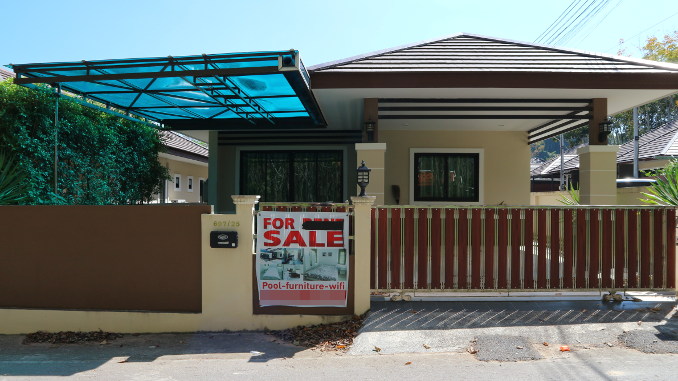 We all know by now that foreigners can not buy land in Thailand.
But if we still talk about a foreigner buying land in Thailand, it means that he either leases it for at least 30 years (with the option of another 30 years) or buys it in the name of his Thai wife or girlfriend. The latter is not reccomended, however.

Note that any lease contract that lasts longer than 3 years must be registered at the Land Registry Department. Otherwise it’s not valid.

Here is a small list for the land dimensions:

If a piece of land is for sale in Thailand, this is almost always stated on a sign in Rai. This is important for foreigners, who often can only read the numbers on the sales signs.

Thailand has several different types of land titles. They differ in the value and accuracy of the boundaries. We start with the best and most valuable title for foreigners.

The most important and valuable land title is the Chanot. Only with a Chanot the property boundaries are measured exactly (by GPS) and thus the property size and boundary stones are exactly defined.

Foreigners should only buy or lease land that has this type of title.

For all other land titles, trouble with the neighbors is predictable. They might suddenly claime that the their land begins on a completely different coconut tree than previously defined, etc. To be precise, if you bought the land with a lower title and paid for it, the neighbors might come one after the other and cut a slice of “your” land again.

But even a chanot can be burdened with loans or leases. Therefore, you should check the title at the land registry office before a purchase or lease, preferably by a lawyer.

The second highest title is the Nor Sor Sam Gor! Again, this is still a legal land title, with the property boundaries and boundary points are determined by an aerial photograph. The land can be divided into smaller plots and legal acts need not be publicly advertised.

The Nor Sor Sam is a land paper that confirms a particular person as the owner and entitles him to use the land. It is not a deed of ownership. In this land title, the boundaries and boundary points are not 100 percent set in maps, which always leads to problems in capturing the actual land area.

All other, lower land titles, such as the Sor Por Gor 4, Por Bor Tor 6 or Sor Kor 1, are merely confirmation certificates that a piece of land exists and the holder “may” have rights on it due to a year-ling use or inheritance.

In the case of Por Bor Tor 6 he already has paid taxes for it.

The former Taksin government had been trying to persuade the Thais to rewrite all of their land into chanots so that at some point there would be only one land paper left. At least in some tourist areas Thailand is on the right track.

Note: Always hire a lawyer if you want to buy or lease a piece of land in Thailand. Never make a private contract without a lawyer and authorities.